Halton Moor is a district of east Leeds, West Yorkshire, England, about three miles east of Leeds city centre close to the A63. It is situated between Killingbeck to the north, Temple Newsam to the south, Osmondthorpe to the west and Halton and Colton to the east.

The area is mainly a council housing estate with approximately 1000 homes, made up of semi-detached houses, with some detached sand terraced houses and some high rise blocks of flats.

Before the 20th century, Halton Moor was open land between Osmondthorpe and the older village of Halton which was constructed in the late 19th century.

Halton Moor Estate was built in the 1930s, one of several low-density housing estates in Leeds built to accommodate the growing population and to house people moved from the areas of high-density housing destroyed in the inner-city slum clearances.

Through the 1980s and 1990s, the estate suffered a period of decline. Although it benefited from estate action funding from 1989, by 2000 the decline was so marked that a committee of MPs recommended the estate for demolition and reconstruction.

However, following substantial intervention both through renovation of the housing stock and selective demolition of harder to let properties, the estate is now seen as having good scope for continuing regeneration.

Halton Moor was built as a low density garden suburb, one of several constructed in Leeds in the 1930s and 1940s.

It is set on the side of a hill overlooking East End Park and Leeds City Centre. The western boundary of Halton Moor is marked by Wyke Beck, a tributary of the River Aire which rises in Roundhay Park and discharges into the River Aire at Rothwell

The estate is laid out around Coronation Parade, a central boulevard running east to west. Several roads running broadly north to south following the contours of the hillside, while at the centre of the estate is a relatively large open greenspace. Subsequently, substantial traffic calming measures including the installation of speed cushions and bumps, chicanes and selective road closures have been introduced to reduce the level of joyriding.

To the north of the Halton Moor Estate but forming part of Halton Moor is the Sutton Park Estate, an older housing estate built by the William Sutton Housing Trust and now part of the Affinity Sutton housing association.

In 2011, construction of 54 new homes including a number built to the German 'passivhaus' standard for low energy development was completed.
Halton Moor combined with the Wykebecks in Osmondthorpe has a population of around 6,233 people.

5.43% of the population is from a BME background, around half the proportion for Leeds as a whole. The area has higher than average levels of benefit claimants and worklessness, though it compares favourably to Leeds as a whole for indicators around quality of housing and environment, and community safety.


Halton Moor - In the Media.
Due to its decline in the 1980s and 1990s, Halton Moor has been the focus of media attention, of which much was bad. In 2008 this culminated in the area being the subject of the television series CCTV Cities in which journalist Donal MacIntyre focused on crime and delinquency, showing arson on Bonfire Night (during which police were attacked with fireworks), car theft and joyriding.

Before the United Kingdom general elections of 2001 and 2005, author and journalist Sue Townsend reported for The Observer, looking at the impact of a Labour Government on some of the most deprived areas in Leeds. The second visit identified improvements to the estate brought about by regeneration.

The TV films Tina Goes Shopping and Tina Takes a Break, the first parts of a trilogy including Mischief Night directed by Penny Woolcock were partly filmed on Halton Moor using several actors from the area, some of whom subsequently fell foul of the law in real life for activities depicted in the films... 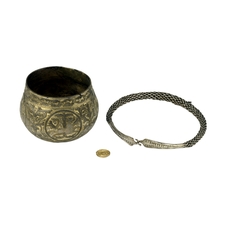 The decoration on this fine cup, from a hoard found at Halton Moor in LEEDS, shows four large animals, which include a bull and a running beast. Between them are sprays of foliage; some of the tendrils end with the heads of yet more animals. The style of this decoration is Carolingian and shows that it was made in western Europe in the late eighth or the ninth century and was an import to England.

The silver neck-ring is the most characteristically Viking piece in the hoard and is of a type found throughout the Scandinavian homelands' of the Vikings. It was made by plaiting silver rods together to form a rigid ring which was fastened using hooks. Such rings were worn by men.

As well as these outstanding objects, 860 silver coins and two gold stamped pendants were found in the hoard. One of these is now in the Danish National Museum in Copenhagen, the other is shown here; they were clearly inspired by a coin design. It shows a human head in profile and, like a coin, was struck from a die.

The burial date of a hoard with coins can often be accurately established: when minted, a coin usually carries the name of the current king. All the silver coins found at Halton Moor were minted under King Cnut, Danish ruler of England from 1016 – 1035. We know that the latest coin was made in the late 1020s and this gives the earliest possible date for burial of the whole hoard. 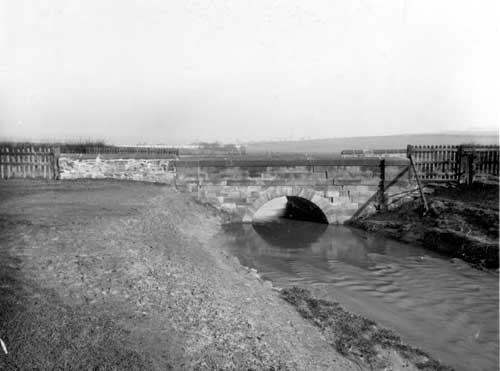 Description:
29th August 1946. View of premises of R.G.Kilburn joiner and undertaker of Halton Moor Road in a high walled courtyard.
Also in the courtyard is Oxley's decorators, A.Dodgson, plumber and J.Cunningham boot and shoe repairer. 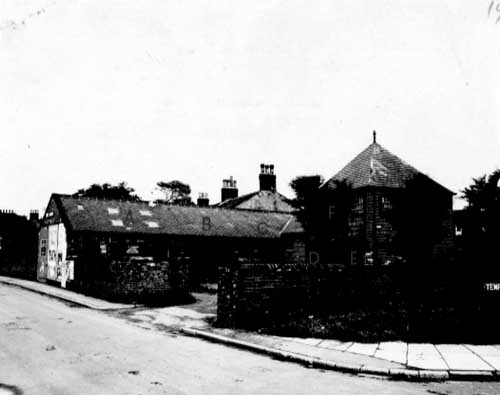 Description:
31st August 1946. Premises of R.G.Kilburn joiners and undertakers. Several other businesses share the site. In view is a low building with a large open door with a man working on a car inside. A car is parked outside. The ground in front is rough grass and mud. The small central building is R.G.Kilburns. 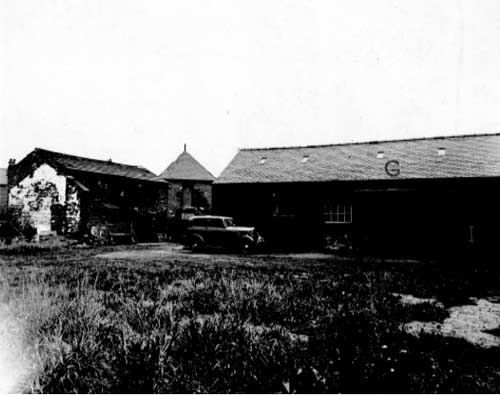 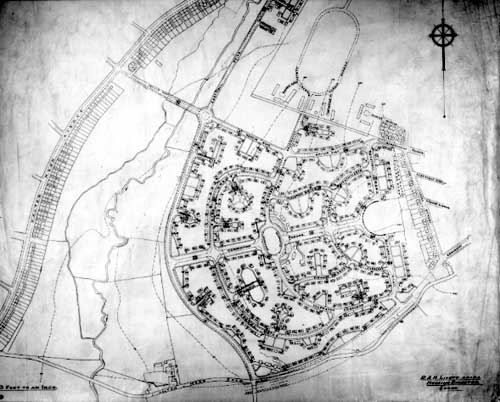 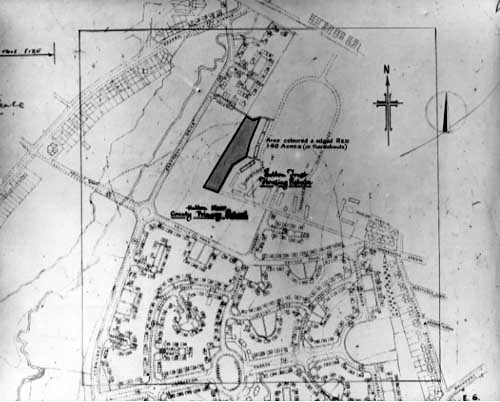 Description:
31st August 1946. View down Halton Moor Road with side street Temple Court on the right. There are semi-detached houses along the road on the right. On the left, the back wall of the premises of R.G.Kilburn, joiner and undertaker. 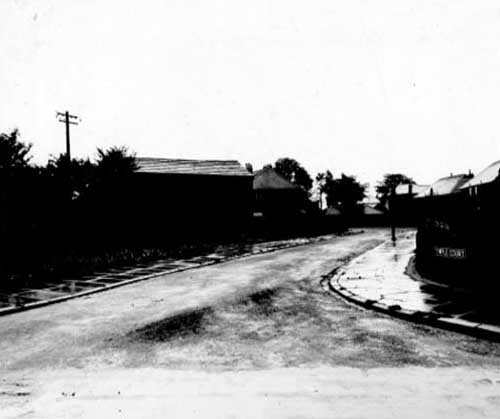 Description:
10th February 1937. This view shows the line of the road running into the distance. A line of council houses run along the horizon to the right. To the extreme left are some farm buildings. In the foreground can be seen the stone walls of the Wyke Beck bridge. Fields stand at either side of the road. 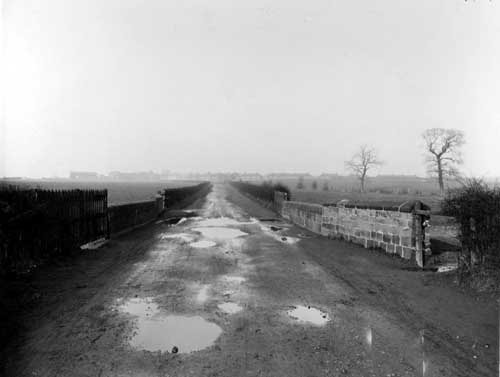 Description:
21st August 1923. This view shows the road under construction through farmland. The foreground shows the foundation in the process of being laid. To the right beyond the part stone wall and the part wood fence are fields receding into the distance where a Haystack and some houses can just be seen.At the left there is a field with mature trees behind a wooden fence. Two men are standing at the centre and two more stand on the crest of the hill. 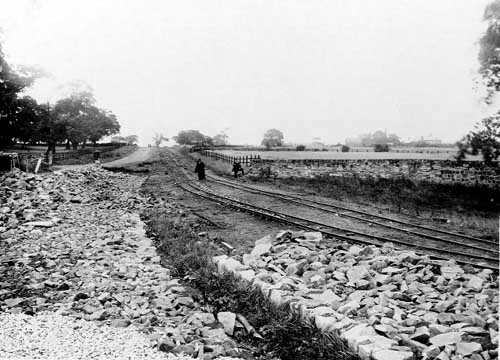 Description:
23rd June 1930. Council houses in the background. A fenced off children's playground on halton moor estate to the center has in it; swings to the left, roundabout in the center with children on it, two children on the see-saw and a tall slide. 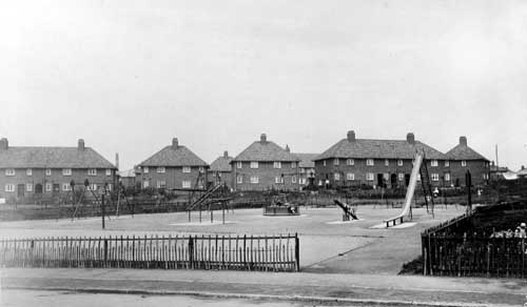 Description:
28th September 1955. Showing subsidence on Halton Moor Road, near the bridge over Wyke Beck. Heading up to the back shop now called mace.
The bridge has a low stone wall, with fields visible beyond. 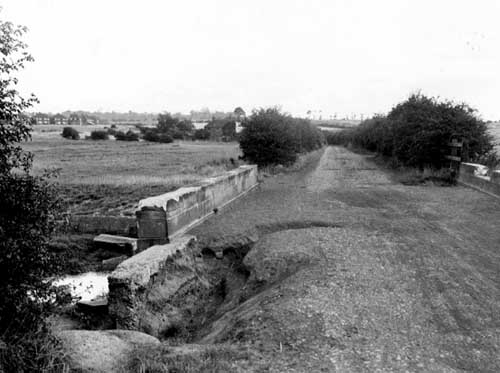 Description:
1946. Photograph looking across the tram line of Halton Moor Junction, towards the back of the Irwin Arms. There are small cottages just visible and a clear view of overhead cables on the tram line.

The road in the foreground is Templenewsam Road.

The tram lines going to the right went all the way up to Templenewsam House.In the center of the picture is the side of the Irwin Arms Pub, and the tram-lines at that point were the Halton Terminus. 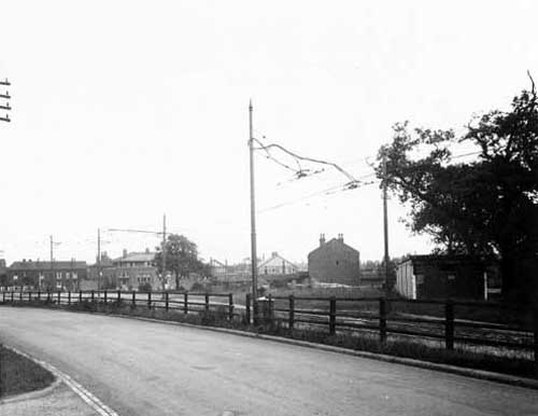 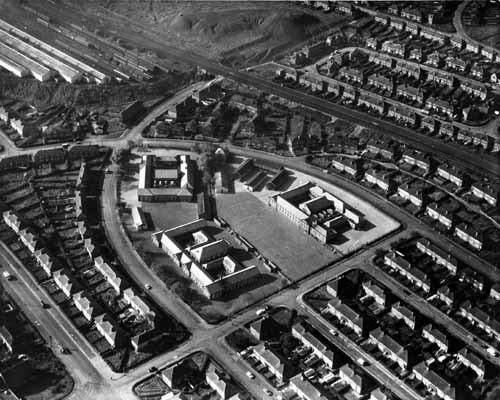